“Brittney’s knowledge and courtesy are boundless.” 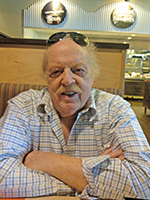 Richard Rosenblatt spent his youth in art, music, and photography schools, and made countless trips on the greatest steamships of the 1930s. A West Point graduate of 1949, Rosenblatt became a pilot in Europe; an OSI counter-intelligence analyst and linguist in Wiesbaden and in Paris; a onetime parachute instructor with the Foreign Legion in Algeria; and aide to the head of the Strategic Air Command Depot in Casablanca, Morocco. His career then moved to include industrial engineering, advertising, media, underwriting, the law, and publishing, and he co-authored the novel Black Gold Gray. Rosenblatt won five gold medals in the Senior Olympics in San Diego, and now, past the age of 90, he lives in La Jolla, California. 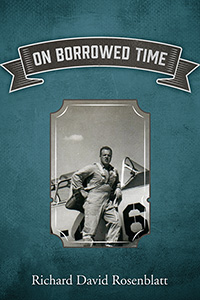 Richard Rosenblatt may hold the world record for sheer number of lifetime pursuits, professions, and adventures…In his remarkable autobiography, Rosenblatt shares scenes from a glamorous childhood in the south of France, to dinner at the Biltmore in New York City with Eddie Rickenbacker and Jimmie Doolittle. Lunch with Albert Einstein. Tea with Eleanor Roosevelt, Lauren Bacall, the Sultan of Morocco, the Duke of Windsor, Salvador Dali, Marc Chagall, Jackson Pollock, and Kurt Weill… Rosenblatt met the rulers of Russia, Spain, France, Morocco, the United States, and other world leaders-as well as movie stars and moguls, captains of industry, the world’s greatest scientists, generals, explorers, athletes, crooks, gamblers, and sociopaths. On Borrowed Time is an extraordinary memoir-the true story of an extraordinary life-by a man who “wanted to experience everything.”

“Being a first time author, I have to say I am very pleased in choosing Outskirts Press to publish The Forgotten Temple. Every question I had – no matter how small – was answered with respect and great care. I would recommend Outskirts Press to any first time author. Outskirts Press goes out of its way in making sure you understand and are aware of every turn in publishing your book takes. What I really appreciated, the final decision was always mine. My hat is off to you Outskirts. I had no idea what to expect and you made it fun and exciting to publish a first time book. Thank you. I look forward to working with you now and in the future.”

CoCo Saltzgiver has taught workshops from self-healing to guided meditation. She is a 12 year breast cancer survivor and going strong. Her studies focus on the power and resilience of the human spirit and the process to recognize and overcome life’s emotional grips.

The Forgotten Temple‘s birth all started with the unfortunate death, of a beloved sister. The personnel story brings forth a Journey the main character and Author CoCo Saltzgiver embarked on, to realize and find that she had forgotten the most important part of herself. It is a unique story of forgiveness, releasing old pain and habits that we all hold on to for one reason or another. The willingness and effort it took to reach a positive outcome. The Forgotten Temple is based on 30 years of walking a Spiritual Path, realizing every day is a new day to become aware of what we are changing in our lives, and what we are holding on to that will not allow change and growth. It empowers people to go within, and find what they have protected. If feeling the pain is too much to deal with from all your experiences, this book can give you the tools to move forward in your everyday life and make those changes. You can take your own journey in discovering what resides in your Temple that needs forgiveness and freedom to let go….enjoy! It is the willingness and the longing for a new life that set CoCo free, which in turn gave her the opportunity to give it to others. With the Work Book as a guided tool, it allows the reader to write down all that is in need of healing and releasing in their lives. The Forgotten Temple, is a powerful Journey to take inside of you. This empowers the reader to breathe in this World even that much more!

“Thank you all so much – what you have done is patiently and painstakingly assisting me in achieving one of my true lifelong dreams and that is so invaluable to me. The staff at Outskirts Press is the best there is & I hope we continue to work together establishing a great relationship as author and publisher on my journey to becoming a seriously great and successful writer. Again and from the bottom of my heart – thank you all so very much. ”

Born in the West Oak Lane section of Philadelphia, Pennsylvania & eventually raised in North Philadelphia, D. began writing poetry and short stories at a very early age. Eternally possessed with a creative mind not only filled with imagination but also many questions, D. often sought answers to those questions while always conversing with any & everyone – providing the writings with flavor, color and verve. Currently residing near Raleigh, North Carolina since 2007, D. continues to engage in stimulating discussions with whomever while penning insightful poems and stories brought to life with a unique blend of quirkiness, heart, thought and humor.

Everyone has dreams – you know, the seemingly unattainable things that we all pray for: more money, a better way of life, world peace and the like. And there are even some of us who dare to dream of fame or – believe it or not – actually being with famous people; those celebrities we wish we could just meet, get to know better and possibly hope to see in an altogether different light. However, there realistically isn’t a snowball’s chance of that happening … or is there? Meet Phil Stenopolis – a hard-working, amicable kind of guy who’s pretty much just like the rest of us. With a rather, well, entertaining affinity that spans the rainbow ever since his younger days, Phil’s likable, works two jobs, is an automotive enthusiast & is totally smitten with a young lady who just happens to be the hottest star in the adult-film industry – the beautiful Cherri Ryder. And thanks to his sister Phoebe, his best buddy Diego and in spite of factors and advice that most people would either ignore, laugh about and accept or run like hell from, Phil is about to be granted his fondest wish: a chance to meet his dream girl in person … and discover there’s much more to the object of his desires than meets the eye – a whole lot more. And who knows? Phil just may end up finding out a few new things about himself in the process.