“Outskirts Press made the publishing experience so easy!” 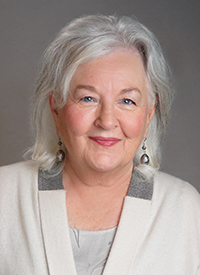 Alicia Kay Lanier is a writer and activist who lives in North Texas. She began her writing career as a daily newspaper reporter in Oklahoma and Texas. Since then, she has written about real estate, technology, adoption issues, political topics, and for business and corporate publications. Alicia was editor-writer for the periodical, Adoption Triad Forum ; co-founder and founding president of TxCARE; former board member for Concerned United Birthparents (CUB) and California Open; and presenter at American Adoption Congress (AAC) conferences. She was the first birthmother to serve on the Board of Directors for Hope Cottage Pregnancy and Adoption Center in Dallas, and is editor of the book, Hope, A Collection of Birthfamily Stories, Poems & Letters, which contains Alicia’s essay, An Invisible Tattoo. She spends much of her leisure time with friends and family, especially with her four grandchildren whom she calls her Joy Buttons because of the fun they add to her life. Alicia’s Blog: https://birthmomunspeakableloss.wordpress.com/. See reviews at Amazon.com on book page for My Unspeakable Loss 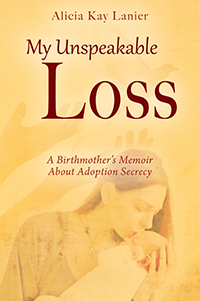 Mother Reveals Saga of Secret Baby Given to Strangers. In 1965, Alicia Kay Lanier finishes her University journalism studies in Texas and embarks on an exciting career as a daily newspaper reporter in another state. She has been raised in a Christian home and she is still a virgin. Alicia quickly finds her new job and friends to be as thrilling as she had expected. But, a few months later, Alicia discovers she is pregnant. The fact that she is unmarried, combined with the recent death of a parent, influences her to give her infant to strangers who want to adopt him. Alicia keeps this baby a secret from her family and friends for over two decades. Alicia later marries and the couple has other children. In the mid-eighties, a series of family crises threatens the family’s serene image and the marriage; the author says: “To family and close friends, my life at age 48 looked pretty good: Longtime marriage, pretty daughters, professional career, lovely home. What they could not see was the marriage was on shaky ground, my daughters were in distress, and I had kept a sad secret for over two decades.” Alicia’s saga includes a nostalgic portrayal of her parents and early family life in addition to intense truth telling about the marital-family dilemmas she encountered while ending secret-keeping. Confronting a closed adoption system, which hides information from all parties involved, Alicia and her daughters persistently search for lost family; that journey has surprising twists and turns and presents new challenges for Alicia and her children in reunion and relationship renewal. Covering several decades, her memoir draws from Alicia’s vivid memories and extensive personal journal and family letters. Written in the style of a contemporary novel, there are flashbacks to Alicia’s years as a teenager learning to deal with the opposite sex and intimacy; her life as a daily newspaper reporter in Oklahoma and Texas; reflections about her months living in a “home for unwed mothers;” meditation on the shame and grief felt by birthmothers of the closed adoption era; and Alicia’s evolution into being a writer and advocate for adoptee rights and other issues; and more. See reviews at Amazon.com on book page for My Unspeakable Loss. Alicia’s Blog: https://birthmomunspeakableloss.wordpress.com/