“I feel very comfortable with Outskirts Press because my Author Representative is so very helpful and thorough. When I have a problem, she always manages to solve it efficiently and quickly.” 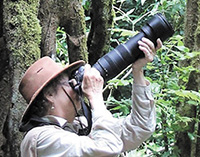 Carol Creager has spent more than fifty years communicating with her dogs, so she found it easy to understand Seeley’s connections with his master Nick and what they do to enjoy their lives together. 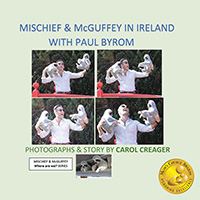 We were so excited about traveling through Ireland with our favorite singer. What fun! Ireland has so many diverse places to see and explore: Belleek pottery, Waterford glass, & wool factories, dogs herding sheep; the Cliffs of Moher; historic sites, such as bridges & castles; castle hotels; thatched cottages; the National Stud with its famous horses; flowers everywhere; so much to see & do. We hope you will enjoy our adventures as much as we did, in green Ireland.
~ Mischief & McGuffey

“My cover is wonderful. Many thanks!”

Gabriela Ionela Keller currently holds a B.A. in the History of Decolonization from the University of La Verne, which she earned in 2001. She also earned a Masters Degree in World History with an emphasis on Nationalism from California State Polytechnic University Pomona in 2004. Ms. Keller was a Ph.D. student in History at Claremont Graduate University from 2004-2010. Born in Romania prematurely, weighing a mere pound and a half. At seven months old, she was given an injection of an outdated polio vaccine, an action that ultimately caused her cerebral palsy.

The major theme is the role of women, ordinary and royal, during World War I. For centuries, women have been considered second-class citizens, and because of this prevailing attitude by men, women too often have been relegated to subordinate roles in society. One male physician, Dr. Charles Meigs, in the 1860s, wrote that a woman “has a head almost too small for intellect but just big enough for love.” Nevertheless, women persevered and stepped into uncharted territory as they pursued careers beyond the traditional roles of being housewives. Some of the struggles that women had to endure to achieve professional recognition in the public sphere are examined, and also the participation of European queens in the war effort and their personifications as living symbols of nationalism for their nations. The contributions to the war efforts of Queen Mary of Great Britain (1867–1953), Czarina Alexandra of Russia (1872–1918), and Queen Marie of Romania (1875–1938) are discussed.

Marian Ely lives a quiet retired life in Corvallis, Oregon and actively continues to write. “My favorite activity besides writing is reading the newspaper in the morning and then doing the crossword puzzle in my favorite college coffee hangout called The Beanery next to Oregon State University campus. If you are ever in Corvallis, try The Beanery’s Sumatra coffee with a sesame bagel and herb cream cheese. It doesn’t get much better than that!”

This is a collection of letters that represents my experiences in West Germany during the Cold War. I served in the US Army there from November, 1974 to February, 1978. I was a Radio Teletype Operator and then had the wonderful experience of singing with the 7th Army Soldiers’ Chorus based out of USAREUR (US Army Europe) in Heidelberg. My entire time of three years and three months in West Germany was full of adventures that were delightful, challenging and occasionally downright scary.