“This is my first experience with publishing a book. It could not have been any easier. The expert assistance from my Author Representative Dana made the whole process an enjoyable one. I am working on my second book and am looking forward to doing business with Outskirts Press.” 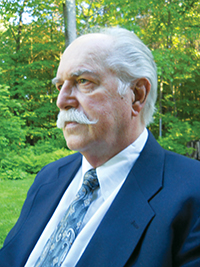 Roger B. Pratt is retired, which allowed him the time to pursue this project. Compiling these old letters to book form presents a fascinating insight into the adventurous daily life of a young man in the late 1800’s. 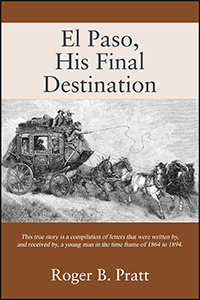 Extremely Ambitious and Curious Individual. Each letter reflects his daily life and surroundings in fascinating detail. Beginning when this seventeen year old young man from Vermont joins the Vermont militia and enters the Civil War. After serving ten months and rising to the rank of Corporal, the war ends. He is mustered out and returns temporarily to Vermont. This extremely ambitious and curious individual decides to leave home and starts his westerly journey. He ventures through seven western states, one territory, and Mexico, holding various positions in sixteen different occupations. He spends the last five years of his life in El Paso, Texas, as President of his El Paso Transfer Company business. His journey ends with his death from diabetes at the age of forty seven. Misspelled words were not corrected in the transition from the original letters to typed book pages to preserve the authenticity and character of the letters. Copies of original letters with envelopes, and certain documents, are included after certain typed book pages to show the interesting letter heads and envelopes.

“All in all, I was very impressed with the exceptional job your group did on my book and the cover pages were fantastic and have received notice from other authors and publishers.” 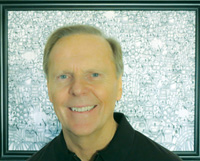 Randall Bennett became a Special Agent in 1987 and has received numerous awards and commendations, including the FBI Director’s Award for Excellence in International Terrorism Investigations, The Diplomatic Security Service Special Agent and Employee of the Year, The U.S. Department of State Award for Heroism, Spain’s Medal of Merit with Distinguished White Cross, several awards from the Pakistan Ministry of Interior, the country of Ukraine, and others from the U.S. Marine Corp, the CIA, DEA, ATF, U.S. Secret Service, the U.S. Coast Guard, and many others. He is currently retired but continues to provide security expertise overseas as a contractor for the Diplomatic Security Service. 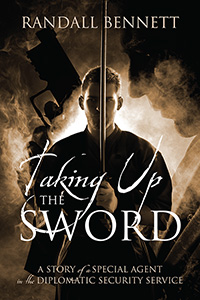 With humor and other times through the heartbreak and drama that accompanies the loss of friends from violent acts of terrorists, Randall Bennett’s memoir reveals his evolution from a new Special Agent to one of the most experienced in the U.S. Government. Bennett and his various teams approached each mission with intense focus, courage, and compassion. Taking Up the Sword relates the wide range of his adventures, from searching for narco-terrorist operations in the Colombian jungle with the true Tarzan of the Amazon, to rescuing abandoned family pets and a baby gorilla while protecting the American citizens in Kinshasa, Zaire, to risking his own life trying to save Wall Street Journal Reporter Daniel Pearl. It includes the actions that led to the capture of “The Dirty Bomber” Jose Padilla, as well as his nearly six years in Pakistan and a tour as head of security for the U.S. Diplomatic Mission in Iraq. Bennett survived bombings, rockets, and assaults against himself and those he was sworn to protect throughout his highly decorated career, all while doing a job he loves. With an original and fascinating perspective, Special Agent Bennett takes you behind the scenes-to the jungles, deserts, mountains, and exotic back streets of foreign countries-where these elite and highly trained Special Agents do things that books are written about and movies are made for-quietly and often without recognition.

“Outskirts Press has been a fantastic experience. Everyone has been extremely knowledgeable, but also very responsive, positive, friendly and helpful. Time frames have been quick and as promised. Your marketing support is also excellent after publishing. I am very impressed with Outskirts and hope to start a new book since the last three are now published.”

Kathryn J. Kappler was born in Fort Worth, Texas, but spent her childhood and young adulthood outside the United States, in Newfoundland, France and Spain, because of her upbringing in a military family. She is a former Regent Scholar of the University of California, and graduated Magna cum Laude from UCLA with a degree in Economics. She subsequently earned an MBA with honors at University of Southern California. Throughout her life, Kathryn has sustained an ardent interest in history. The author’s family has been associated with Native Americans for several generations. She has lived and traveled extensively on Indian reservations of the Southwest while researching early Native American silver jewelry. She has spent many years working with troubled horses.

The three volumes of My Own Pioneers together tell a remarkable story of the desperate pioneer struggles of four generations of the author’s family. Although the memorable historical journey begins seven generations ago, these three volumes of stories focus on four important pioneer generation. They are the culmination of fifteen years of painstaking research as the author carefully reconstructs her family’s pioneer struggles from before 1830 to 1918 using information from family records, journals, memoirs, histories and letters, supplemented by accounts from their pioneer companions, and by Church and other official records. Volume I tells about the author’s once prosperous pioneer families survived the French and Indian War and the War of 1812, then eventually relocated to join the newly founded Mormon Church. The stories tell how the pressure of mobs and mob wars eventually forced these families to abandon everything as they were driven from place to place, until they found themselves exiled on the western-most border of the United States—at the Missouri River—looking toward the wild and hostile West as their only refuge. Stories describe how dozens of family members were among the Mormon refugees who died by the hundreds at the Missouri River, of illness, starvation and exposure. Yet family members had managed to journey among Indians on the frontier to preach, and had sailed through nearly catastrophic ocean storms to preach in England. And despite much sorrow and hardship, this volume relates how five family members left their loved ones behind at the sickly Missouri River in order to march down the Old Santa Fe Trail in the U.S. Army’s Mormon Battalion to prove their loyalty to the government by helping to fight a war with Mexico.

“Thank all of you at Outskirts press, you have done a wonderful job. You have made my first experience at publishing a book very enjoyable and hassle free. I can’t thank you enough.”

About Ritt Jordan: I am one of the searchers who have been deeply involved in this quest to unlock the nine clues and find the solution which leads to the treasure. The solution that I found is not a hundred percent guarantee, but it is a valid one for sure. It will shed new light on the chase. Ritt Jordan is my pen name; I don’t post much on the internet blogs, but I’m known as “Ritt” on one of them, and “Plato II” on another one. I am a retired CFO of a medium-large wholesale distributing corporation. I have worked as a Controller, Accountant and Accounting Supervisor for several different companies. My hobbies include: Art-oil painting & sketching~ Music-guitar, violin and piano~ Philosophy~ Astronomy, Fishing, and of course, I love writing. In addition to this title, I am working on a novel, titled “Storm of Deceit”. It’s about a futuristic scenario in which a couple of astrobiologists must find a solution to an earth-ending catastrophe that is believed to be inevitable. It’s about seventy percent completed. – Ritt Jordan

Almost four years have passed since Forrest Fenn released his memoir, The Thrill of the Chase. In his book he tells of a bronze treasure chest which he hid somewhere in the Rocky Mountains north of Santa Fe, NM. Since it was released, thousands of treasure hunters and adventurers have been searching for this hidden treasure. His memoir includes a poem with nine clues; unlock the clues and follow the directions precisely and it will lead you to the treasure. If you find it, he says he will give you title to the gold. If you dream of riches and would like a challenge then this book will give you a head start. This book was reviewed by Jack Magnus for Readers’ Favorite. He writes: A Treasure More Than Gold is itself a treasure indeed. I had a marvelous time reading this book and found myself looking up one thing after another on Google. I had not been familiar with Forrest Fenn and his hidden treasure before I read this. I enjoyed seeing how Ritt worked at deciphering the clues and particularly liked his short-cut approach to finding the Blaze. I was awestruck by the beauty of the area as seen in his photographs. The value of this search is more than that of the treasure itself. The adventure itself seems so grand.