“I can see where Outskirts Press really knows their business and that they have done this for quite a while. They know how to cater to the author in a responsive and responsible way. I plan to keep on publishing my passion with Outskirts Press.”

David, or “Bill,” Verhines had experienced academic success, journalistic success, and even Charismatic success. In this single, powerful volume he devises a way to understand everything in terms of a life-satisfying worldview. Now, having drawn the attention of a startling cryptid companion in the process, “Bill” now wishes to share his perspective with the church, family, friends, neighbors, and any companion who might listen — be that companion cryptid or otherwise.”

I am not the sort of person who goes out of his way looking for encounters with cryptid creatures. I have no interest in believing they are real. I never had any desire to encounter one. Until something appeared right in front of me on an Interstate highway. After experiencing several plateaus in my life, the truck-driving rhythm of the road has afforded me a lot of time to reflect on my life, my experience, and how to understand reality. My hours of contemplation led me to construct a worldview that emphasized the importance of a “bipedal” existence as a tie-in with all of life — Christian life, in particular. I had a “driver’s seat, front-row” experience with the largest bipedal event in all of human history. Applying my endeavors to this newfound-jet-airliner-winged dinosaur has led me to several startling new insights. The purpose of this book is to share these insights with you.

“I had a great time through the process and my book looks great. I am very happy. Thanks so much!” 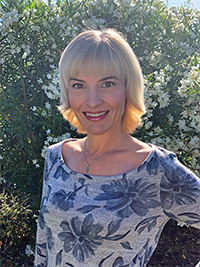 Elaine Walker is a microtonal composer and electronic musician with a deep interest in philosophy and chaos theory. Being raised by two loving mathematics professors provided her with a natural appreciation for mathematics. Her Master’s thesis at New York University was on using chaos dynamics to compose and perform music. She has advocated for the idea of humans living in space through her music and years of leadership in non-profit space organizations. She spent five summers in the High Arctic on the NASA Haughton-Mars Project. She is a proponent of longevity and a member of the cryonics organization, Alcor. 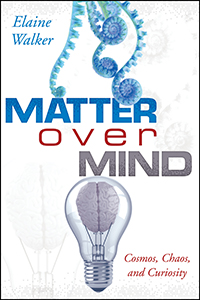 “Walker’s erudition is astounding-there is very little of intellectual interest that is not covered by this book, and she provides one of the most accessible introductions to chaos theory available.” -Kirkus Reviews. Matter Over Mind begins with a thought-provoking journey through the Cosmos to illustrate the startling contrast between nature’s chaotic but rich processes, and the human mind’s organized but underperforming habits. This book reveals how humanity could achieve even greater heights if we allow ourselves to rethink how we think. Chaos theory, which is wonderfully explained in this book is a foundational recipe in nature and large group behavior. Abstract thinking is the opposite force that leads to frustrating inconsistencies in society and even limitations in technology. Viewing the world through both lenses illuminates the deeper dynamics of the world and a better way forward for humanity.

“A very thorough, well-organized publishing process obviously honed over time. I would recommend to anyone considering publishing a book.” 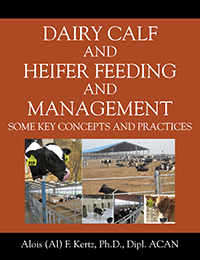 Looking for a technical but practical science-based book on Dairy Calf and Heifer Feeding and Management? Are you a field person such as a nutritionist or veterinarian or calf/heifer specialist, a commercial dairy or calf/heifer operation, a student, or dairy scientist?

“Lisa did an excellent job. Since this was my first experience with self-publishing, I appreciated her personal and prompt attention to details.”

James B. Hudson is Professor Emeritus at the University of British Columbia, Vancouver, where over the last 45 years he has carried out teaching and laboratory research on many human, animal and bacterial viruses, and the use of safe natural products to keep them under control when necessary. This has included several collaborative projects with institutes in developing countries. He has published more than 150 papers in peer – reviewed scientific journals. Since his semi-retirement from academic life, he has lived in peaceful Tsawwassen, British Columbia, with his first and only wife, Louise.

We live in an age of paranoia, bombarded daily by the media about the dangers of infectious microbes and viruses that threaten our very existence. The pharmaceutical and biotech industries insist that we are in a continuous state of war with our microbes and we have to protect ourselves with their elaborate weapons of microbial destruction. But do we really need them? Each of our bodies is teeming with trillions of microbes and viruses. Many of them are normal lifetime residents that do us no harm. In fact, some of them are essential to our health. Microbes and viruses were on the planet long before humans appeared, and we must learn to live in harmony with them. Professor Hudson takes us on a fascinating journey into the world of microbes and viruses, and puts things into perspective in a nontechnical, lighthearted exploration of this amazing microcosm within us all.

“My experience was great with Jamie!”

Interstellar Space Craft Powered by Spacergy to Anywhere. A lifetime of studying, analyzing, and interpretation has uncovered a new model of the universe that predicts a vast amount of clean inexhaustible energy. The sintāq project is designed to explain the new universe model, apply the understanding, and produce a universe energy extraction device to prove the prediction of the sintāq interpretation.

“My Author Rep – Dana – went above and beyond to help me resolve all issues to my complete satisfaction and surpassed my expectations of a professional. Dana should be commended on all levels as she is a truly superstellar Rep. I have 12 more books I want to publish and really hope she continues to be my Rep (if she will have me).”

Jade Yu is an artist, writer, and philosopher from California. In 2014, she published the first volume of a four-volume book defining her philosophy: Infinite Potentiality Theory (IPT). As her uniquely compelling worldview, IPT is her attempt to empower others to achieve their highest potential every day, inspiring all to their best self.

On 5 June 2014, I launched my blog, ICPTheory.com, as a compendium to my newly-released book: Igniting an East-West Globalizing Dialogue, Volume I: Thus Spoke Chuang Tzu. The blog is designed to bring the major concepts of my book into practical and everyday relevance to all individuals – across time, space, and geography – for immediate application and use. Through my blog, I answer the ‘so what factor’ (SWF) as to how and why Infinite Potentiality Theory is critically relevant. Ultimately, I encourage all individuals to be the best version of themselves through immediate, active, and unwavering realization of their infinite creative potentiality.

“I was apprehensive at first, but everything happened on time and on budget – what a refreshing change.”

Karl L. Dahlstrom is a modern Renaissance man: author, inventor, educator, legal researcher, scientist and contrarian to conventional thought. Although he is degreed (an MS in physics), his prodigious talents lie in “thinking outside the box” and finding hidden truths. Karl and his wife, Clara, live in Celina, Texas with their three children and grandchildren nearby in the Dallas-FtWorth area.

In his ground breaking first book, veteran researcher and inventor/scientist Karl Dahlstrom and co-author C. Phillip Clegg have written an exceptionally readable, mind expanding and almost equation free account of how an accidental discovery of a relatively new mathematical theorem came to overturn an established scientific paradigm. The best theories of the universe are beautiful, simple and profound as in Einstein’s famous formula, E=MC2. This book is elegant in its simplicity and yet complex in its scope of re-defining an ordered universe comprising an unseen force. This book zeros in on a 150 year old controversy of Darwinian Evolution and tears it apart with laser like precision such that the very core of that “theory” is-‘to borrow a phrase from Descartes’-“rent asunder.” As the saying goes, “There is nothing new under the sun.” Since the birth of the universe, an organizing principle of matter, embedded in the natural laws of physics, and eventually life itself has manifested itself in a precise and verifiable pattern found in literally everything that exist: from the composition of meteorites to seawater, soil, and gasses here on earth as well as in tabulated data on everything from stock prices to lengths of rivers. This discovery, of a little known law of mathematics called Benford’s Law, simply states that in any tabulated data set of non-contrived numbers, the frequency of the occurrence of the first significant digits 1 through 9, as the first significant digit, will conform to a set pattern: ‘1’ will occur 30.x% of the time;’2′ will occur 17.x% of the time, etc. with the frequency of each succeeding number being less than the preceding number in a fixed declining pattern.