“Thank you Outskirts Press for your assistance and support! The Support Team, from the outset along with the review team have made my book publication possible. From the day I submitted my manuscript, to the day I received the email that my manuscript was accepted, and most important, the day I received the email notification that my book is published, has been an excellent journey with great support. Details were reviewed, and the process for author corrections was well done and very smooth. This is a day that was long in coming. Thanks to the team at Outskirts Press, that help made my book and official day of publication possible. Today, I add Author to my Vitae and professional credentials. WE MADE IT!” 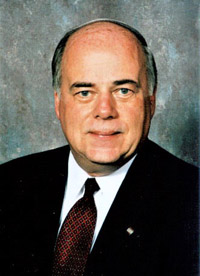 Kenneth J. Kogut, Ph.D., P.E. maintains a professional energy and management consulting practice serving clients in the commercial, industrial, institutional, and governmental sectors. He has been actively involved in the energy field focused on designing various energy management programs and systems, applications of energy rates, and environmental programs throughout his entire professional career. Mr. Kogut has published a number of papers on the subject of energy. He is a registered Professional Engineer (P.E.) in several states, currently holds a number of certifications in the energy field, and is an active instructor in the energy field. Mr. Kogut is also listed in several Who’s Who publications, and is a recipient of a number of energy awards and honors, including induction into the Association of Energy Engineers (AEE) Energy Managers’ Hall of Fame. Mr. Kogut has received a Bachelor of Mechanical Engineering degree and a Master of Engineering degree from the University of Detroit, and has also received a Ph.D. from Lacrosse University in Engineering Management. His outside interests include golf, wine, and fine dining, along with professional, social, and community activities. Personal interests include history related readings, along with readings associated with individuals involved with contributions to science, engineering, world activities, and personal endeavors. Mr. Kogut enjoys the application of variations on words and its uses in the English language. 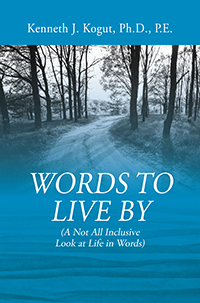 Words and phrases to reflect on, with the thought of thinking on ways to apply them to our daily lives. Words have become a basic form of communication in society. Taking the time to take a look at a play on words, and interesting statements by some notable Notables. Reflections on these interesting words and phrases compilation, may open up a world of thought and possible inspiration at some points in our lives today and tomorrow.

“I asked Outskirts Press to publish a large work consisting of four volumes of full-color scientific material. The total page count for this work is about 3400 pages. The size of each of the four volumes is 8.5X11X2.5 inches. When I received the first copies of the first volume I was surprised by the quality of the work. The paper color and weight exceeded my expectation. The color reproduction exceeded my expectation. Outskirts Press had reproduced the text, many tables of data, and many figures precisely as I submitted them. I recommend them to any potential author who wishes to be proud of a serious full-color book. I had been looking for years for a publisher that could and would do a large work in full color.”

Drs. Wilson and Zavada have collaborated for more than 35 years. Here are their biographies. Dr. John Zavada received a B.A. degree in physics from Catholic University, Washington, D.C., and M.S. and Ph.D. degrees, also in physics, from New York University. Dr. Zavada joined the National Science Foundation (NSF), Washington, D.C., in August of 2010 where he served as Program Director in the Division of Electrical, Communications, and Cyber Systems. His program involved research projects in optics and photonic devices. He was Program Manager in the Electronics Division of the Army Research Office, where he managed programs in photonic devices and advanced materials. Dr. Zavada had assignments at the Army’s European Research Office in London, England, where he directed R&D programs in optoelectronics throughout Europe. Dr. Zavada has authored more than 160 refereed publications and has given over 50 conference and seminar presentations. He has held academic appointments at Drexel University, Duke University, North Carolina State University, and the Imperial College of Science and Technology in London. Dr. Robert Wilson is a highly published, retired research scientist with a PhD in physics, a linguist, having studied classical Greek for about 30 years, a philosopher, an outdoorsman, and a world traveler. He was born and raised in rural, agrarian Ohio, and moved to California in 1961. Dr. Wilson is the author or co-author of 338 refereed journal papers, about 150 invited or contributed papers at US and international technical conferences, six book chapters, and 14 books. He is the co-author of books on ion implantation and secondary ion mass spectrometry. He has done research in non-conventional nuclear reactors, deep space propulsion, and the application of ions beams to the modification of the properties of materials for a variety of purposes that include semiconductor devices and circuits.

This work incorporates the results of 41 years experience in ion implantation and 36 years in secondary ion mass spectrometry (SIMS). These two technologies became intertwined when the need became apparent for the measurement of depth distributions of elements implanted into many materials under many conditions during and after implantation, for which SIMS was ideally suited, and the realization that while SIMS was a powerful tool for this, SIMS required accurate calibration for the many elements in the many materials, for which ion implantation offered a versatile solution. In 1973, George R. Brewer and RGW published a book [John Wiley] on ion beams and ion implantation, and in 1989, Fred Stevie, Charles Magee, and RGW published a book on SIMS [Wiley Interscience]. The latter book deals primarily with SIMS of semiconductors. This present work adds metals and insulators to this list of substrate materials. The metals studied here are Be, Al, Ti, TiN, TiSi2, Ni, Cu, W, and Au. The Insulators (dielectrics) are SiO2, Si3N4, Al2O3, LiNbO3, UO2. The semiconductors are Si, Ge, GaP, GaAs, GaSb, InP, InAs, InSb, HgCdTe. There are four volumes included in this work. This volume contains material for secondary ion mass spectrometry (SIMS) and applications. Some new concepts of SIMS are introduced, which we call RSFs, stoichiometric SIMS, enhanced SIMS using molecules, and solid-state electron affinities. A comparison of electron affinities derived from this work with previous value of electron affinity from the literature is included. Corrections to previously published values of SIMS RSFs are described. Finally, mass spectra for materials are shown. Volume 2 contains material about ion implantation and applications of ion implantation and secondary ion mass spectrometry, and the beginning of implanted depth distributions measured using SIMS, and volumes 3 and 4 are a continuation of implanted depth distributions measured using SIMS. Ion implantation in volume 2 includes a major discussion of channeled depth distributions and the measurement of electronic stopping powers using the maximum channeling depths. Another significant issue is implanter systems, and another is application of SIMS to commercial device structures. The data included in this work might be used as an aid in future studies of the physics of ion channeling, electronic stopping in solids, and electron affinities measured in solids or solid-state electron affinities, especially for low electron affinity elements. These studies might be suitable for theses or dissertations in graduate schools.