“My Author Representative has worked with me on several books and I’m always impressed that she can expedite through the various problems that crop up. The Outskirts Team is just that – a dedicated group of publishing professionals that makes the process orderly and controlled.” 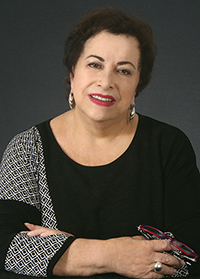 E. J. Gandolfo is a former advertising agency copywriter and sales executive. She is an artist and antique dealer and resides in the Boston area. Gandolfo is the author of the EVVY CIPA award winning book, To Paint A Murder and the EVVY CIPA nominated book, A Tale of Deceit, both Veronica Howard Vintage Mysteries. 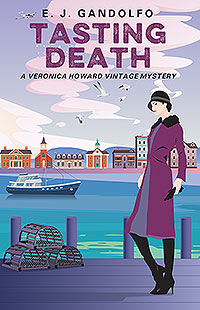 Veronica Howard and Harry Hunt take on a drug cartel that is ingeniously distributing their product in Bromfield. The fourth book in the series of Veronica Howard Vintage Mysteries, death comes close to home in this 1980s tale about the food industry.

“I can only imagine the agony and frustration involved had I opted to go the traditional literary agent/publicist route:  My novel would still have been just a dream.  In this day and age, Outskirts Press is the ONLY way to go. I cannot tell you enough how much I appreciate each and every one of you there.  No BS; just results!  Outskirts Press and the people who make it all happen are without a doubt one of the most professional, capable, and caring organizations with which I have ever had the pleasure of doing business.  Every penny I’ve spent with Outskirts Press has been money well-spent and a fraction of what I would have had to spend had I gone the traditional route.  Time is money, and the traditional route would have cost me ten times as much in time wasted.  I am one happy author, and I would recommend you to any existing or aspiring author who is currently wondering which way to go.  Thank you Jennifer, Jamie, Jackie, Lisa, and everybody at Outskirts who had a hand in making my novel a reality.  You are all THE BEST at what you do!”

John G. Werner II grew up on the Florida Gulf Coast. During his youth, he learned the waters in and around Pensacola through his father’s love of boats and the sea. Graduating in 1970 from Emory University, Mr. Werner worked as an instructional designer and systems documentation specialist in Atlanta for 24 years. After returning to Pensacola in 2003, Mr. Werner rekindled his own love of the sea and sailing by acquiring the Black Swan, a 43-foot C&C Landfall that took fourth in class in the 2010 Regata al Sol, a 54-year-old biannual race between Pensacola, Florida, and Isla Mujeres, Mexico.

What started as a carefree sailing holiday has ended in terror and disbelief for Stan and Emily Breedlove as they find themselves trapped and helpless in the dead of night, their boat buffeted without mercy by an angry sea and torrential winds. Stan now clings to life after being medevac’d to Trinity Regional Hospital. He is in a coma and not expected to live despite excellent care by the hospital’s diligent staff. The Countywide Police Department is convinced that Dr. Emily Breedlove, Stan’s wife of over thirty years, is responsible, and they don’t think she acted alone. Sgt. David O’Malley and his Countywide team are determined to discover the evidence that will prove them right. Paul Stempler, the Breedlove’s attorney, is racing against the clock to counter O’Malley’s efforts. Is his client innocent, or is she the victim of a multiple personality disorder? Stempler doesn’t have a clue and must rely on his skill and instincts in trusting an aging sea captain, his young first mate, and a small-town librarian to sort out the truth — a truth that will elude them until they can discover a way to pick apart the shroud of treachery and deceit that surrounds it. Set in the northwest Florida panhandle in and around Pensacola, Florida, and the Perdido Key-Gulf Shores area, Red Right Returning is a story of intrigue, deception, and providence that will keep you guessing to the very end.

“Lisa was outstanding every step of the way. As a first time author, I had plenty of questions and concerns, and Lisa was always there for me. I was extremely pleased with the final product.”

Charles Ayer lives in Vernon, Connecticut, with his wife, singer Claudia Ayer. They have three grown children. His second Walter Hudson novel, Pleasant Hollow, will be released in the near future.

Why did two apparently unrelated murder victims, a young prostitute and an unidentified Korean man, die on the streets of New York City with the same cryptic words, “A thousand points of light,” on their lips? NYPD Detective Sergeant Walter Hudson’s efforts to find out unexpectedly but inexorably lure him into the treacherous worlds of political intrigue, unchecked power, and limitless wealth-worlds that he is ill-equipped to understand. But he has to learn fast as he begins to peel back the layers of a monstrous plot that threatens not only the city he loves, but his country as well. It’s a race against time, and Detective Hudson has less time than he thinks.

“In my experience, there are always hiccups in the publishing process. However, Laura did a great job of shepherding through the changes and I am very satisfied with the overall experience and the final product.”

The author is a technologist and mystery writer. Art’s novels feature true-to-life scientists whose lives are disrupted by terror and murder. Art hosts a website offering practical benefits from the results of scientific research: http://artchester.net Art’s fiction is set in and around Malibu, California, his home for many years. He now lives in Michigan, New York state and Hawaii.

Insider trading – white-collar crime. It’s harmless to everyone except a few investors. Or is it? Consider a hedge fund that disrupts emergency calls, making profitable trades while people lie dying. Computer scientist Evan Olsson discovers a company that’s willing to commit murder to fatten its profits. With good friends, technology and a robotic transformation, he uncovers the hidden tricks of their business. Unfortunately, Evan becomes prey as well as pursuer and finds his life in immediate danger. As he tries to dodge a murderous adversary, Evan has to deal with risk of a different kind: an imminent explosion as the two women in his life collide. Death By Arbitrage or Live Low Die High pushes the boundaries of the mystery genre with its blend of adventure and romance in a real-world setting. The work of scientist-author Urno Barthel, it continues the story begun in Death By Probability and Death By Tech. The novels are ideal for fans of mysteries and techno-thrillers. These believable stories and convincing characters pull readers into a new and exciting world.

“Thanks again for another great experience in the world of book publishing! Each time I have another book published through Outskirts Press, it only gets better. I was particularly impressed with Elaine this time. She was quick to respond to every question I had, and was a real pleasure to work with. ”

Martha Gabour Manuel, a Louisiana native, lives in Ventress, thirty-two miles from the state’s capitol of Baton Rouge. Martha’s strong ties to Louisiana are what inspire her writings. The author of Murder on False River and Political Treason, Martha started writing books after retiring from the traditional work force. Her love of surprises keeps friends wondering who will be the next to appear in a novel written by Martha Gabour Manuel.

Margie grabbed the police chief’s arm as he was taking aim; instinctively he swung around. There was a loud explosion as the gun went off. The illustrious Dr. Marguerite Hinckley’s body plummeted to the floor. Henry dropped to his knees beside her and began crying out, “Oh my God, what have I done?” In shock and disbelief, Mel watched from her vantage point outside the window. An extra surge of adrenaline shot through her body, reminding the relatively new private investigator she had to quickly distance herself from the unimaginable scene just witnessed. Mel had been hired to follow Margie by her husband, Seth, in order to find out if his wife was having an affair. Little did she know that the horror viewed scarcely minutes earlier was only a preview of what was to come, as she is thrown into the middle of what may be the strangest and most bizarre murder investigation she will likely ever know.