“As a newbie, I had much to learn but I couldn’t have done it without my Author Representative. Life is a learning experience!”

Warren Tindall is a retired teacher. He lives and writes on the lost Coast of Northern California, which is six hours north of San Francisco. His home is in a little valley surrounded by redwood trees with a salmon spawning creek in the backyard. Adventure writing for him is a recreational activity. 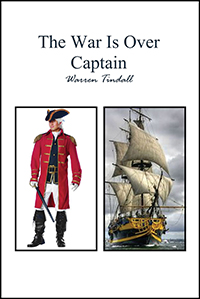 The War Is Over Captain is set in the Post Napoleonic war era. Readers will appreciate the authentic depiction of this historical era. Scottish professional soldier Captain Hugh M’Glemere of the disbanded King’s 577th Foote Regiment is unemployed and facing poverty. Almost by accident, he rescues from a mob what he perceives to be a simple “Jew peddler.” Actually, Solomon Woolsey is a wealthy Jewish coal merchant and ship owner. A matchmaker has found a bride for Solomon’s oldest son, Itzac, in a Jewish village near Solomon’s old home in Russia. Hugh is employed to escort a family member on a voyage to bring the bride to Edinburgh. When it’s revealed the local Baron’s mercenary Cossacks are terrorizing the village, Hugh insists on being accompanied by a squad of his also unemployed noncommissioned officers. They take passage through the Baltic to Riga aboard two of Solomon’s small Collier brigs. A proxy marriage is performed at the village. The celebration is crashed by drunken Cossacks not realizing they are attacking a detachment of veteran Scottish Redcoats. Fun and games turn deadly to the horror of the village elders. To escape certain retribution, the villagers flee to Solomon’s ships with Hugh’s promise to transport them to Jerusalem and their Promised Land. The story chronicles the voyage of the bride to her husband in Edinburgh and the eventual delivery of the villagers to their Ottoman controlled Promised Land by way of Scotland and the pirate infested Mediterranean. In the process, soldier Hugh M’Glemere becomes a sea captain in command of his own ship.