“My Author Representative has worked with me on several books and is always both helpful and professional.” 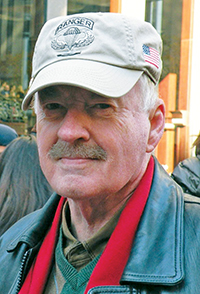 Lee Martin, a native of West Virginia lives in the Atlanta, Georgia area. Retired from the U.S. Army with the rank of Colonel, he was awarded the Bronze Star and Vietnamese Gallantry Cross for his service in Vietnam. He has a Doctorate in Counseling and is an adjunct professor teaching courses in Psychology at an Atlanta area university. Lee is the author of fifteen other mystery novels.

It is November, 1991. About the time the final nail was being driven in the coffin of the Soviet Union, from the remnants of its former Red Army leadership and defunct KGB came cold-blooded mobsters such as Andrei Guryev, a sadistic crime lord who set about terrorizing New York’s Brighton Beach with his extortion and sex trafficking racket. One man, however, stood in his way…Bruce McGowan. You might know McGowan as America’s quintessential counter-terrorist operative, but find out what he was like twenty plus years before when as an FBI Special Agent he took on the ever-surging Russian Mafiya. Working undercover as a homeless vagrant outside of a Russian restaurant, a known Mafiya operation base, Bruce is not only gathering evidence to bring down the malevolent mob boss and his organization but end the senseless slaying of the homeless on the street who seem to always be getting in Guryev’s way. Bruce, working in tandem with the lovely Russian-bred Misha Orlov, herself a Bureau plant inside Guryev’s operation, in turn becomes the pursued and number one on the crime boss’ target list. Although Bruce can be composed, compassionate and cool-headed, you will not believe he’s the same man when you experience his ruthless side. He plays by the rules…mostly…but don’t make the mistake of going after his family or otherwise pressing his buttons. You may not live to see tomorrow.