“I want to tell you how pleased I am with my book. The cover has struct a chord and raved about in the local area where the story originates.”

Bob Love was born in 1933 by a mid-wife at Mountain Home, Elmore County, Idaho, and raised in the territory in which this story is set. From age four years, he spent the summers with his aunt and uncle, the county road overseer, following along the 80-mile road through Pine Grove, Featherville, Rocky Bar, and over the summit of Mt. Baldy to Atlanta, opening and maintaining the corridor. Love spent his 52-year career in law enforcement and the insurance industry. He served for 43 years as an independent adjuster/investigator including major case aviation, maritime and commercial risk cases. His research stretched from the conception in 1957 to the publication of his first non-fiction book, Destiny’s Voyage, in 2006. Following his Korean War service in the USAF Love joined the Boise Police Department. He ultimately became the Chief of Police in Nyssa, Oregon, then served as a detective for the Ada County Sheriff in Idaho. Declining a bid to run for Sheriff, Bob entered the independent adjuster profession in Idaho. In 1967 he took a mid-winter trip with his wife and daughters to Fairbanks, Alaska. He also spent two and a half years in Hawaii handling major case claims, including aircraft accidents in the Marshall Island and during filming of the Magnum PI TV show. Love has been a student of journalism since he was editor of his high school paper, and his college major before the military draft interrupted his studies. Now retired Love resides with his lovely companion Patricia and their Bishon, Murphy, in Boise, Idaho. 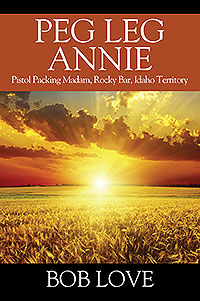 Annie McIntyre is a four-year-old girl from an Iowa farm, trekking across the vast uncivilized lands of the American frontier. This is a young girl growing up in an Idaho Territorial mining camp of Rocky Bar whose experience from the gunfight in the street involving her father, a marriage to an abusive man old enough to be her father, and the birth of her children, escaping the abuse of her miner husband, and leads Annie on a path to destiny. Being alone and in need of self-preservation she became a saloon dancer ultimately forming her own brothels. Becoming a strong gruff woman packing a .44 pistol, she still had a compassionate soul and humanitarian spirit, evidenced by her aid and financial assistance to miners. Then tragedy struck in the high mountains when caught in a snowstorm. Annie McIntyre Morrow’s story tells of the strength and resolve of this pistol-packing madam to survive. For the first time, this story lays to rest the identities of the two people who become the most intertwined in her life. The ending will perhaps pose controversy among those who hold Annie’s lifestyle in disrespect, but the author finds a deeper understanding through his personal faith. After hundreds of articles over the years this is the first book written about the life of Peg Leg Annie McIntyre Morrow. As her great-grand daughter in-law states, “she can now rest in peace.”