“I’ve authored books issued by conventional publishers, formed my own company, used POD and other venues, and I am sooo delighted to have finally discovered Outskirts Press!” 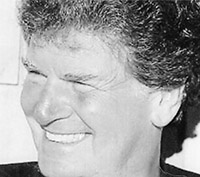 Novelist, screenwriter, playwright Thomas B. Sawyer was Head Writer/Showrunner of the classic CBS TV series, MURDER, SHE WROTE, for which he wrote 24 episodes. Author of CROSS PURPOSES and A MAJOR PRODUCTION! Edgar and Emmy-nominated, Head Writer/Showrunner or Producer/Story Editor on 15 network TV series. He has sold, then written 9 series pilots, 100 episodes, both comedy and drama. He wrote/directed/produced the feature-film cult comedy, GOSH ALICE GOODBODY. His documentary short film, REUNION, was honored by the New York Film Festival, the Rochester and Edinburgh Festivals, and received national theatrical release. Tom is co-librettist/lyricist of JACK, a musical drama about John F. Kennedy which, backed by the Shuberts, has been performed to acclaim in the US and Europe. He is publisher of STORYBASE 2.0 writer’s software. Tom’s book, FICTION WRITING DEMYSTIFIED, and STORYBASE software are Writer’s Digest Book Club Selections. The best-selling mystery/thriller about the JFK assassination, THE SIXTEENTH MAN, was his first novel. His second, best-selling NO PLACE TO RUN, was the first novel to make the case that 9/11 was a conspiracy. Tom’s memoir, THE ADVENTURES OF THE REAL TOM SAWYER, was published recently, along with the co-authored 9 BADASS SECRETS FOR PUTTING YOURSELF IN LUCK’S WAY. Tom has taught writing at UCLA, at Pepperdine University, at numerous major writers conferences, and online at Screenwriters University. http://www.ThomasBSawyer.com 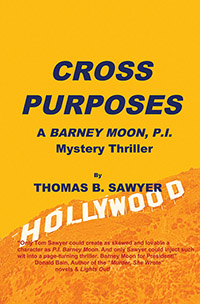 Manhattan Private Investigator Barney Moon can hack, charm or con his way into or out of damned-near anything. Barney is driven — to solve cases, nail bad guys, and to anyplace not reachable via the NY Subway. Barney never learned to drive. And, like most born/bred New Yorkers, he regards pretty much anywhere else as “Out-of-Town.” But there is one place for which he has a particular, lifelong aversion: Los Angeles, California, which Barney regards as an Alien Planet. And – guess where he finds himself stranded? In Cross Purposes, a case takes the reluctant Barney and his driver, Al Drobowsky to Los Angeles to obtain a single fingerprint. But things quickly get complicated. That night, of what by then seems sure to be only two in Tinseltown, Al learns he must immediately return to Brooklyn. Next morning, Barney notices his rented car being hot-wired by a young woman. Pragmatically, in exchange for not having Melodie Seaver arrested, he enlists the gorgeous 18 year-old Southern California delinquent to drive him around for – at most – one day. Except that things quickly escalate for this comically ill-matched pair, into murders, conspiracies, and mortal danger. Very fortuitously, the Good News for Barney: Melodie’s driving skills are awesome. Together, our off-the-wall team narrowly survives, and solves the complex, scary mess they’ve stumbled into. “Tom Sawyer’s inaugural Barney Moon P.I. novel, Cross Purposes, is the best thing to spread shoe leather on the wise-cracking streets of La-La Land since Bogey and Bacall. And Cross Purposes has Sawyer’s larger-than-life characters, refreshing humor, Hitchcockian plot twists, and his great, so-authentic dialogue.” -Andrew McAleer, Author of 101 Habits of Highly Successful Novelists & Fatal Deeds.